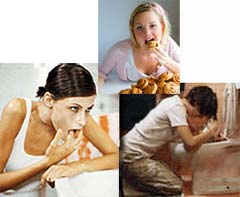 nativeremedies.com - Bulimia is an eating disorder characterized by the eating of a large amount of food in a short space of time (binging) followed by self-induced vomiting, or excessive use of laxatives, diuretics, fasting or exercise to ‘rid’ the body of the food (purging).

People with Bulimia nervosa struggle with their binge eating disorder. They often feel that they are out of control during their binging sessions and then feel tremendous shame and guilt afterwards. It is the self-induced purging that makes them feel a release of this tension and guilt.

Unlike Anorexia Nervosa, (where the individual usually feels a sense of accomplishment and often denies having a problem), Bulimics generally feel ashamed of their binge eating disorder and know that what they are doing ‘is not normal’.

They evaluate themselves primarily on their body weight and shape, and thus often have a very poor self-esteem. Ironically, most people with Bulimia tend to be either overweight or fall within 10% of their normal body weight, and rarely attain the skinny figures that they desire and aim for.

As with other eating disorders, most Bulimics are female and the disorder tends to develop in adolescents or young women. The binge eating disorder known as Bulimia is much more prevalent in Western Societies than elsewhere in the world. This is possibly due to the common society-ideal of a slim, trim figure that is emphasized and encouraged by the media. Bulimia nervosa is a serious condition that can cause extremely severe medical consequences if left untreated. Thankfully, there are binge eating disorder treatment plans that offer help for overcoming Bulimia.

Overcoming Bulimia nervosa can be very challenging so the earlier treatment starts, the better the chances are for a positive outcome. It is important to stick to treatment and resolve underlying emotional issues to reduce the chances of relapse.

Should you seek professional help for yourself or your child, a battery of tests will be done by a health care professional before a diagnosis is made. This should include a full physical examination, with possible blood tests and urine analysis. Your doctor will be checking for confirmation of an eating disorder, as well as checking for any damage or medical complications that may have been caused by the Bulimia. A person overcoming Bulimia will also be referred to a psychologist who will take a full personal and family history, discuss your feelings and attitudes towards food and body-image and also note the history of your condition - how often you binge and purge, the emotions associated with these events and how it is affecting your life.

Eating a large amount of food in a fixed period of time, followed by compensating techniques (exercise) or purging (vomiting or use of laxatives). This must occur at least twice a week for a period of three months.
sense of loss of control during binges

Self-evaluation that is unreasonably influenced by body shape and weight

Distorted body perception that may be accompanied by poor self-esteem, anxiety and depression

A pre-occupation with dieting, but also a tendency to horde food or food-related items such as recipes and cookbooks

Genetics – Research suggests that women with a Bulimic family member are more likely to develop Bulimia than the average women. While this may suggest that there is a genetic component to the disorder, it may be due to the shared experiences and learned behaviors within the family context. It is also likely that personality traits related to Bulimia such as perfectionism, emotional sensitivity and addictive personality tendencies are inherited rather than the disorder itself.

Family and learnt behavior – As mentioned learnt behavior may contribute to an increased risk of Bulimia. Parents who place great importance on physical appearances, criticize their child’s body shape, or who are dieting themselves, are more likely to have a child who will develop an eating disorder.

Culture and The Media – Western society places great emphasis on the ideal body and this is especially aimed at women. The pre-pubescent female figure is highly valued and many young women feel that they need to strive for this unrealistic and unhealthy ideal. Many TV programs and magazines encourage thinness, as hundreds of young women aspire to look like the models and actresses that society idealizes. Both young men and women have almost come to expect that these “air-brushed” and semi-starving models represent the normal population.
Restrictive eating – Dieting may be a huge cause of Bulimia. Studies have shown that dieting and restrictive eating lead to obsessions about food which may ultimately lead to Bulimia. Once again, society, the media, peers, and sometimes parents, often promote dieting as apposed to a healthy life-style and balanced diet. Being overweight as a child or teenager is often a precipitator to developing Bulimia.

There are a number of binge eating disorder treatment options available to help in the struggle against Bulimia. Some form of psychotherapy is usually necessary as Bulimia is essentially a psychological disorder wrapped in emotions and personal conflicts that need to be dealt with. Pharmaceutical medications are also commonly prescribed in order to help treat accompanying problems such as depression.

Individual, family or group therapy may be very beneficial in dealing with Bulimia. Cognitive Behavioral Therapy (CBT) helps the individual address the negative ideas surrounding food, body-image and self-esteem, while providing constructive ways of implementing new food habits. Family therapy may help the entire family deal with underlying conflicts and provide coping techniques for the family as a whole, while support groups provide a source of support and comfort. Individual therapy addresses underlying personal issues such as self-esteem and guilt associated with food. On the whole, psychotherapy is very successful in treating Bulimia and it is advised that you research which type or types of therapy would best suit you.

Medication may be prescribed to Bulimic patients to help improve related symptoms such as accompanying depression, anxiety or obsessive behavior. Commonly prescribed drugs include antidepressants such as fluoxetine (Prozac), paroxetine (Paxil), and the antipsychotic drug lithium. While these drugs may help initially, up to 80% of patients relapse after the medication is discontinued, and in many cases, the side-effects are distressing.

It is strongly advised that you research any prescription medication and their side-effects before agreeing to drug therapy.

Of the binge eating disorder treatment options available, natural remedies can be of great benefit in alleviating symptoms of anxiety and depression associated with Bulimia without the negative side effects of prescription medications. Some herbal formulas that assist with the related symptoms of Bulimia include Passiflora Incarnata – to soothe the mind and calm the nerves. Hypericum perforatum (St John’s Wort) has been very successful in treating the depression which often accompanies an eating disorder.

Natural remedies such as MindSoothe may facilitate a reasonable attitude and lessen the burden on pressured minds. MindSoothe may also promote a well-adjusted outlook and positive temperament and support healthy sleep patterns and routine appetite.