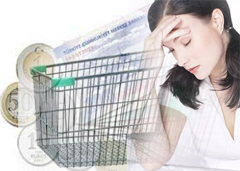 The Psychology Of Spending: How You Spend Affects How Much You Spend

There is fresh evidence that people spend less when paying cash than using credit, cash-equivalent scrip or gift certificates. They also spend less when they have to estimate expenses in detail.

The conclusion that cash discourages spending, and credit or gift cards encourage it, arises from four studies that examined two factors in purchasing behavior: when consumers part with their money (cash versus credit) and the form of payment (cash, cash-like scrip, gift certificate or credit card). The results build on growing evidence that, as the authors wrote, "The more transparent the payment outflow, the greater the aversion to spending, or higher the 'pain of paying.'" Cash is viewed as the most transparent form of payment.

In the first study, 114 participants estimated how much they would pay using various payment forms for a vividly described restaurant meal. The results showed that "People are willing to spend (or pay) more when they use a credit card than when using cash," the authors wrote. They attributed the difference in spending behavior to the way cash can reinforce the pain of paying.

The authors also found that people who said they were more thoughtful in real life about amounts charged to credit spent less when using a fictitious card.

In the second study, researchers highlighted the future pain of paying by having 57 participants estimate food expenses for an imaginary Thanksgiving dinner item by item, rather than a holistic total. When they did this, the cash-credit spending gap closed. When people confronted the detailed reality of expenses, it no longer mattered whether they used cash or something else.

The next two studies examined spending differences relative to mode, not timing. In Study 3, 28 participants given a detailed shopping list were found to spend more when they used a $50 gift certificate instead of $50 cash.

In Study 4, 130 participants were given $1 cash or a $1 "gift certificate" to buy candy. At first, they were more willing to spend the gift certificate than the cash. After holding the gift certificate in their wallets for an hour, thus treating it like cash, they became less likely to spend it -- a sign that they had assimilated its value. When researchers again highlighted the difference in transparency between cash and gift certificates, people reverted to their original behavior.

Thus, it appears that simple manipulations can alter spending behavior, and that consumer warnings about the deceptive ease of non-cash payments have merit. "The studies suggest that less transparent payment forms tend to be treated like [play] money and are hence more easily spent (or parted with)," the authors wrote. "Treating nonlegal tender as play money leads to overspending that authorities can warn consumers about."

(Full text of the article is available at http://www.apa.org/journals/releases/xap143213.pdf

The American Psychological Association (APA), in Washington, DC, is the largest scientific and professional organization representing psychology in the United States and is the world's largest association of psychologists. APA's membership includes more than 148,000 researchers, educators, clinicians, consultants and students. Through its divisions in 54 subfields of psychology and affiliations with 60 state, territorial and Canadian provincial associations, APA works to advance psychology as a science, as a profession and as a means of promoting human welfare.