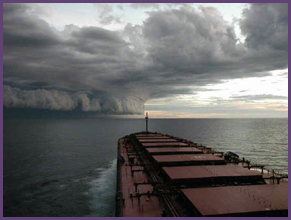 Storm psychology: What comes after?

New Orleans citizens were all too familiar with the sound of gale force winds pounding on their doors and rain drowning their city's streets.

collegiatetimes.com - New Orleans citizens were all too familiar with the sound of gale force winds pounding on their doors and rain drowning their city's streets. Though it had been about three years since the Hurricane Katrina disaster, recent Hurricane Gustav had many residents of Lousiana's capital experiencing an all too realistic case of deja vu.

One Virginia Tech researcher has been studying the psychological effects that the deadly 2005 storm brought forth.

Russell Jones is a professor of psychology who teaches a graduate level course on the effects of trauma on the psyche. Jones has been working with groups in New Orleans that are attempting to help people cope with their tragedies.

"I was there mainly to develop and strengthen mental health infrastructure, to find out what needs help, which areas needed work, and to find out where people were in terms of PTSD (Post Traumatic Stress Disorder) and depression," Jones said.

Jones has also held workshops in New Orleans to try and teach other mental health professionals how to deal with victims of massive mental trauma. Throughout his time in the disaster zone, Jones has learned a considerable amount himself.

"When I speak with victims of a trauma, one thing they always say is, 'It's going to happen again.' That's their number one fear," Jones said.

"The mental health facilities in New Orleans were, as I saw, undermanned, underfunded and not at all ready for Katrina," Jones said. "I was there to provide help to local heath associations and agencies, get the school programs up and running and getting people back and into their homes."

With this lack of mental health treatment options, people, especially those of lower income, were unable to seek treatment. This left the wounds torn by Katrina open and vulnerable to be exploited by a second storm. Jones said that as Gustav approached, thoughts of a mirrored tragedy intensified.

Jones noted that though the storm continues to provoke terror in many of those affected, one thing they did not observe was a rise in suicide after Katrina.

"Individuals felt that they had a greater sense of purpose after the storm. They felt that they wanted to do more in terms of recovery to react to dealing with the consequences," Jones said.

However, with renewed hope in the rebuilding process, people were filled with a greater sense of anxiety knowing that all of their progress could be halted by what may become one of the worst hurricane seasons in Gulf Coast history.

Christopher Flynn, director of Cook Counseling Center, said that when people saw a second storm approaching they gave up.

Flynn lived in New Orleans at the time of Katrina; he was employed at Loyola University, New Orleans Campus as the director of the on-campus counseling center.

"I had been there for 17 years ... After Katrina I saw a lot of good friends and coworkers lose their homes and jobs," Flynn said. "People were just unable to return after they evacuated."

Flynn said that after Katrina most students were transferred to other universities. He mostly worked with other faculty members then.

"It was mostly the faculty that had lost the most, mostly their homes," Flynn said. "There were raised levels of anxiety everywhere."

Though Flynn saw mainly faculty reactions to Katrina, at least one student at Tech was directly affected by the super storms.

Sophomore Trey Stewart lived in Luling, La., a town 30 miles outside of New Orleans, during Katrina.

"My family evacuated to Baton Rouge during Katrina," Stewart said. "There was a lot of wind damage in my neighborhood; two trees got uprooted in my yard ... I think the hardest part was probably that a lot of my friends moved away to Texas and other places."

Stewart was not in New Orleans for Gustav.

Tech has started to prepare for hurricanes, showing that Katrina not only took a toll on Louisiana, but also the rest of the country. According to a statement released by the university, "Virginia Cooperative Extension is working to educate citizens about what they can do before, during and after a major storm hits the East Coast."

Even with the evaluations of the psychological impacts devastating hurricanes have on the Gulf Coast, some people still rise above the statistics.

"The population is almost back to where it was ... it's at about 75 percent, and it's still rising," Flynn said.

As the numbers indicate, many families remain and more have returned to New Orleans, slowly rebuilding their lives and hoping for a return to normalcy.