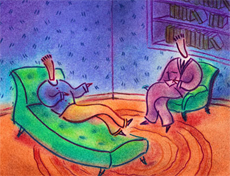 On Wednesday the Vermont Attorney General report on Pharmaceutical marketing disclosures revealed that $3 million was spent on drug promotions in Vermont in 2007, with 11 psychiatrists receiving 20% of the total amount, $630,000, a 25% increase from what psychiatrists were paid in 2006. The report also reveals that 7 of the top 10 drugs that companies paid prescribing fees for were psychiatric drugs. An article in the Vermont Rutland Herald, quoted Vermont Attorney General Bill Sorrell, "It is particularly troubling that the industry is paying large sums of money to influence prescribing practices involving psychiatric drugs." This is the second consecutive year in which Vermont psychiatrists have topped the list. The only other state that requires Pharmaceutical companies to disclose payments to doctors, Minnesota, had identical results; psychiatrists received the most Pharma funding over all other doctors.

On the federal level, Senate investigators uncovered three industry-shaping psychiatrists who failed to report a combined total of about $7.9 million, two of which were psychiatrists attributed with fuelling widespread child psychiatric drugging. First was Maria DelBello, a child psychiatrist at the Cincinnati Children's hospital, who failed to report being paid $180,000 from AstraZeneca, manufacturer of the antipsychotic drug Seroquel. According to the New York Times, "Dr. DelBello's studies of Seroquel in children have helped to fuel the widespread pediatric use of antipsychotic medicines. Those studies were inconclusive, but she has described them as demonstrating that Seroquel is effective in some children." Second is Dr. Joseph Biederman, a child psychiatrist who also fuelled an explosion in the use of powerful antipsychotic drugs in children, who failed to report $1.6 million in consulting fees he earned from drug makers between 2000 and 2007. The third is Alan Schatzberg, who failed to report over $6 million in Pharmaceutical stocks and income. Schatzberg is not only chairman of the psychiatry department at Stanford University, but President Elect of the APA, which publishes the Diagnostic and Statistical Manual of Mental Disorders (DSM), also known as the "billing bible" of mental disorders for which the drugs are being prescribed.

Unlike medical diseases, which are discovered through verifiable physical conditions or abnormalities, DSM disorders are invented by codifying key behaviors and repackaging them as diseases, literally voting them into existence by a show of hands from DSM task members. The influence of Pharmaceutical funding over these task members in "creating" the disorders was exposed in a 2006 study — 56% of those participating in revising the 1994 DSM had undisclosed financial ties to drug companies. Researchers also found that 100% of the psychiatrists on panels overseeing so-called "mood disorders" (which includes the lucrative "bipolar disorder") were financially involved with drug companies that manufacture the drugs prescribed for these conditions, the sales of which are around $40 billion a year worldwide. About 30% of the APA income comes from Pharmaceutical industry advertising, which has earned over $10 million a year from conflicts within the APA and the Pharmaceutical industry. The Washington Post reported that "Last year's meeting of the American Psychiatric Association…reflects the extent of corporate sponsorships…. Some instructors were sponsored by at least a dozen companies."

With Pharmaceutical conflicts of interest garnering increasing scrutiny, both in the press and in federal investigations, the DSM is increasingly coming under fire. A New York Times article, "Psychiatry Handbook Linked to Drug Industry" reported in March this year that "More than half of the task force members who will oversee the next edition of the American Psychiatric Association's most important diagnostic handbook have ties to the drug industry." These ties have created a skyrocketing prescribing rate for psychiatric diagnoses, including a sevenfold increase in "bipolar" diagnoses in the past 13 years, according to a 2007 study.

With federal investigations currently focused on Pharmaceutical funds influencing drug approval, drug safety and prescribing habits, CCHR says that psychiatrists creating mental disorders or approving them into psychiatry's billing bible, the DSM, must be fully investigated for being funded by the drug companies that rely on new mental "disorders" to sell more drugs.