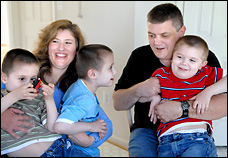 Parents of children with autism

What great questions Heidi!! Please remember that when I answer questions,

Written by Trudy Martin, Parenting A Child With Autism

What great questions Heidi!! Please remember that when I answer questions, I’m going on my expertise as a parent, not as a doctor, psychologist, etc. I have 5110 days of hands on experience with autism. There aren’t too many doctors who can claim the same.

It’s absolutely not out of the ordinary to diagnose autism, even mild forms, at two years of age. I’m not sure what to tell you about your friend’s child, but these are some of the things that my daughter was doing around the age of two:

She only had about 5 words she was saying (Mom was not one of them). She never pointed at things that she wanted, very typical for a 2 year old. She had little to no eye contact. She didn’t respond when I would say her name. (We actually thought she was deaf.) She spun herself around a lot, and didn’t get dizzy. She liked to line things up in a line and would get very upset if they were out of line. She flapped her hands in front of her face for a visual stimulation. She was antisocial. If we were in one room, she wanted to be in another. If we went into her room, she would leave the room. Noises bothered her, like the vacuum. She still plugs her ears today when there is a noise she can’t stand. She wanted to be naked most of the times. I still remember the time I put footie pajamas on her and she had a terrible fit until I took them off her. There easy to identify now.

The difficult thing about autism is that no two children will have the same signs of autism. The key to treating autism in early intervention, the earlier the better.

So how can you support your friend? Here’s some ideas and suggestions. Being a parent of a child with a disability can be a very lonely place. At one time, I read that the divorce rate for parents of children with autism is over 90%. It takes very selfless people to raise a child with autism. The day my daughter was diagnosed with autism, our lives was no longer our own. As with your friend’s child, my daughter had some sort of therapy most hours of the day. I had to quit my full time job. I had to figure out how to care for my other child, as well as making time for being a wife. I lost myself in the process.

The best way I can describe having a child diagnosed with autism is your child dies. What I envisioned for Shelby’s future died the day they told me she had autism. The difficult part was the “shell” of my child was still in front of me, but now I have a different child. Unfortunately, there is no grave for me to visit to mourn my first Shelby.

I’m digressing. To support friends, YOU must make the effort most of the time to connect with your friend. I have little time for myself, let alone my friends. Don’t take it personally when they can’t go out and do something with you. If you want them to visit, child proof your house of anything that is breakable or appealing to the senses. I know the safest place for Shelby to be is in my own house. As soon as I take her to a relative or a friend’s house, I have to be on my guard to see what she will get into that she’s shouldn’t.

Don’t question their parenting skills. We have to pick and choose our battles so if we let some things go that you normally wouldn’t, don’t judge them. My daughter wasn’t potty trained until she was five. Believe me, it wasn’t because I didn’t try. Potty training can be extremely difficult for children with autism. Sometimes the comments that people would say about this would cut deep.

If you think you can handle watching the child for awhile, volunteer to watch him/her so the parents can go do something. Sometimes going to the grocery store is a challenge.

Parents need to go to meetings about their child and often just having someone there as support would mean the world to them. You could take notes for them. It’s hard to listen to people talk about your child, remember what you wanted to bring up in a meeting, and take notes at the same time.