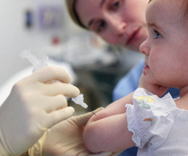 For several years, many parents have worried that autism is caused by a mercury-containing preservative in vaccines. That has been debunked time and again, but the debunking has not been as widely accepted by these parents as the original theory.

Some say the studies showing thimerosal doesn’t cause autism weren’t done properly. Some say they were propaganda put out by a deceiving federal government, the CDC and pharmaceutical companies as part of a coverup. Some then moved from the thimerosal theory to the theory that the MMR vaccine, which never contained thimerosal, is the culprit. It hasn’t helped that people like Jenny McCarthy call the MMR shot the “autism shot.”

The thought is that the virus in the MMR (measles, mumps and rubella) vaccine remains in the bowels of children with gastrointenstinal problems. I’m not sure how that causes autism, but I’m no medical expert, so I’ll just accept that the theory makes medical sense. This theory came out in a British study in 1998.

A recent Associated Press article in the Arizona Daily Star, “New data: Vaccine, autism not linked,”
and similar articles in papers, blogs, news Web sites and on television news programs all over the country say that rigorous testing by a team that included researchers involved in the 1998 study now shows that the MMR shot does not play a role in autism.

Of course, the CDC was involved in this study, so we can still hug the government coverup theory, but I’m not willing to waste my time on it. Those who read this blog regularly (all five of you) know that I never thought any vaccines cause autism, though I have recently said I’d keep an open mind, and I have tried. I can certainly understand a parent believing this if he or she has watched a child regress within days of receiving the vaccination.

The issue was moot long ago in my family. My children, who are now grown, were vaccinated. David had signs of autism before any of his vaccinations. More signs showed as he got older, but none came within a few weeks – or even a month – of any vaccination. I don’t see what difference it would make now anyway. David has autism and we can’t turn back the clock.

It makes a difference for children who haven’t been vaccinated yet, though. If you have a child who hasn’t been vaccinated because you fear it will cause autism, you must decide. Do you trust this latest study? If you do, follow through and get your child vaccinated, unless there’s another medical reason not to.

If you don’t trust this study, just remember that you risk trading the possibility of autism for the possibility of measles, mumps or rubella. And if you would rather risk measles, remember it is contagious, autism isn’t. Mumps and rubella are also contagious and aren’t harmless, either. So you risk spreading measles to children who aren’t old enough for the vaccine, others whose parents don’t trust the vaccine, and those for whom the vaccine was ineffective (a small number, but it still happens).