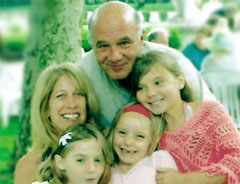 Jeff Fortney: A family lesson from the Depression

Jeff Fortney Sr. of Plano has spent most of his career in banking and is a former Community Voices volunteer columnist. His e-mail address is JFortneySr @aol.com.

The banker came on a Saturday morning. He normally didn't work Saturdays and only had a few stops that day, so instead of giving her one hour to gather her possessions and leave, he generously gave her two.

She was a single mom with seven kids ranging in age from 2 to 17. Her husband had left only a year before. The land was all he had left her.

She told the kids to load everything that was important, to grab about seven chickens and to strap the mattresses to the sides of the three pickups. She had her one daughter, whose sole job was to gather the dishes and family heirlooms. The six boys were to finish up the chores, so that the ranch would be reasonably clean after the bank took it.

It didn't take long, with only two rocky acres and a three-bedroom farm house. After handing the keys to the sheriff, they climbed into the pickups and joined the growing Diaspora of Oklahomans heading west. It was January 1933.

There were no tears, no whining about fairness. It was what it was: They owed the bank and couldn't pay. There was no fear of giving up, either. They understood that it was just another part of the journey called life. As long they were together, all would be fine.

They landed in a little town of Linden. They were welcomed by a family who had recently emigrated from Italy. The Italians had a large, unused farmhouse in disarray, and they also had a need for someone to manage their land. It seemed a perfect fit.

The mother hung a banner with six blue stars during World War II – changing one to gold when a son was killed over Bulgaria. She didn't once ask "Why me?"

The children grew, married and built careers – even though only one of them reached 10th grade. (One son even went back and bought the ranch they had lost.)

My grandmother never owned property after losing the ranch – but she lived a life filled with laughter, grandchildren, great-grandchildren and great-great-grandchildren. She may have died without capital wealth, but she was the wealthiest woman I'd ever met.

I never knew the whole story until I was in my 30s, not because my mother was embarrassed about her family's struggles. (She wasn't.) It was because she never thought it a story worth sharing; it was just the life they had lived.

I was reminded of this as I saw the house across the street cleaned out by a crew hired by a bank. My neighbors were forced to move out two weeks before Christmas. They, too, had lost their home – like thousands of others throughout our community.

There had been no for sale signs, and (sadly) I didn't know them very well. Even if we had been friendlier I doubt I would have been told about the foreclosure. It's not a topic people openly discuss – even with their best friends. In many cases, it's considered a personal failure, and we are raised to not discuss our personal failures.

But it's time we stopped pretending we aren't all in distress. It's time to be honest with ourselves. People are struggling and hurting. It's not a character flaw for your finances to be suffering.

I wish I had known what was going on across the street. I couldn't advise them or solve their problems, but I could listen. Maybe I could have shared a story of a family who suffered a similar fate but never gave up. I wouldn't be here if they had, and we need to remember their struggles now.