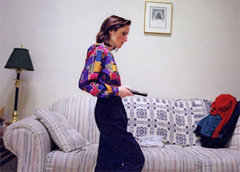 How much do you know about anorexia?

Why do some girls and boys feel compelled to starve themselves, sometimes to death? Are there ways to prevent and deal with this terrible issue?

Why do some girls and boys feel compelled to starve themselves, sometimes to death? Are there ways to prevent and deal with this terrible issue? Take this quiz and see how much you know about anorexia nervosa.

2. There is no way families or friends can help ward off anorexia in a teen.

3. Young female athletes, who know that it is important to have strong, healthy bodies, are especially at risk for anorexia.

4. Those suffering from anorexia see their bodies differently from how they really are.

5. Anorexia in boys is almost unheard of because of their interest in looking muscular.

6. Eating patterns and habits can give clues to eating-disorder issues.

7. Once treated successfully for anorexia, it is highly unlikely that a patient will have further severe problems with the eating disorder.

1. FALSE. Some parents are lulled into a false sense of security because their teen loves to shop for food and prepare meals for the family. She may even seem obsessed with fine dining. She vicariously enjoys the meal that she "can't have because she is too fat" and will find an excuse not to eat the family meal. ("I ate as I went along"; "I'm saving mine for later"; etc.)

2. FALSE. Loved ones can have an influence on a teen's self-esteem by not tying it to body image, and encouraging young men not to judge girls based on looks. The anorexic teen should not be blamed, criticized or told to just stop it. Slenderness as a goal should not be encouraged, but healthy fitness should be. Simply focusing on signs and symptoms of eating disorders is not the answer, nor is the simplistic idea that they are "just" a plea for attention.

3. TRUE. There is a great deal of anorexia among female athletes, especially in sports where girls' bodies are an integral component of scoring, such as in gymnastics, diving and ice-skating. Coaching organizations have taken note of this and are encouraged not to comment on girls' weight, body type or appearance, as opposed to their skill in performing the maneuvers.

4. TRUE. Especially in the later stages, when anorexia has really taken over the victim's way of living, there is a tendency for an almost skeletal profile to be viewed in a full-length mirror as "too fat," which can be a very dangerous misconception. According to the National Institute of Mental Health, one in 200 women suffer from anorexia, and the risk of death to those who have it is 12 times higher than the average death rate from all other causes in teens and women ages 15 to 24.

5. FALSE. Anorexia in high-school and college boys is much less prevalent than in girls, but it's far from unheard of, especially in those with gender or sexual-orientation issues. Instead of or in addition to dieting, males generally achieve their unhealthy weight loss by excessive, compulsive exercising. They may show lowered testosterone levels, weakness, irritability and the growth of a layer of downy hair from the body's effort to keep itself warm.

6. TRUE. Eating a meal with a teen who has anorexia (if you can get her to eat a meal) can yield some important clues. Rituals such as separating foods, eating items in a certain order, excessive chewing, cutting into tiny bites, refusal to eat whole categories of foods, obsession with weight, calories or portion sizes -- all are common ways of trying to gain some mastery over the food that enters the body.

7. FALSE. Even in patients who have been treated successfully, the risk of a relapse is high. A study reported in the journal Psychological Medicine found that 35 percent of patients relapsed within two years, typically around 18 months after leaving the hospital. The most important predictor of relapse was excessive exercise upon leaving the hospital.

If you were able to answer six out of these eight questions correctly, you are well-versed in the complex problem of anorexia among teens.