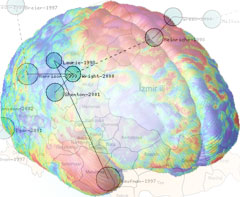 It would be scary if in the middle of the day at work, someone started talking to himself and imagining he was being burned alive.

It would be scary if in the middle of the day at work, someone started talking to himself and imagining he was being burned alive. But there are people who cannot help this, as they might suffer from a mental disorder called schizophrenia.

Schizophrenia is a severe and chronic brain disease, which, according to the National Institute of Mental Health, affects approximately 1 percent of the population. People suffering from this disorder often hear voices in their heads, or believe that other people can read their thoughts and control their minds, or are plotting against them.

Young adults are most prone to the disease. Due to lack of laboratory tests for schizophrenia, diagnosis of the disease is solely based on the patient’s self-reported experiences and observed behavior.

There are many contributing factors that lead to the disease. Usually, an interplay between genes and the environment to which a person is exposed is responsible for the disorder.

Those who have a history of immediate family members suffering from this disease or any other psychiatric diseases have an increased risk of acquiring it. However, studies on identical twins suggest that genes are not the only source of acquiring the disease. The website of the NIMH states that if one twin has schizophrenia, there is only a 40 to 65 percent chance that the other might also suffer from it, even though they have the same set of genes. This indicates that there is more than genetics that causes the disease.

Environmental factors are considered to be the triggers for schizophrenia. These include a variety of factors ranging from the nutritional, hormonal, and chemical environment in the womb of the mother during pregnancy, to the social dynamics and stress a person experiences. Social factors could include drug use, education, and virus exposure.

Although social factors are known to cause schizophrenia, it is believed to have its roots in fetal development. During this time, the brain is wired up and nerve cells grow and divide, building connections with each other. Studies show that sometimes, when a mother is infected by a virus during pregnancy, certain nerve cells migrate to the wrong areas when the brain is first taking shape. Nerve cells thus end up in the wrong places and the connections in the brain are not made properly.

There are also theories designed to help prevent schizophrenia. In general, good health care, nutrition, and a positive emotional environment for women during pregnancy are considered crucial for the health of a baby and are always recommended by doctors. Along with this, research suggests that treating children with love and respect during the early years of childhood is also important for the healthy emotional development of children.

As of today, there is no cure for schizophrenia, but there are ways in which people suffering from this illness can have meaningful and productive lives. Medications, which prevent the patient from hallucinating and reduce other symptoms of schizophrenia, are available. However, these medications have to be taken on a regular basis. It is believed that medications, support, and constant surveillance are quite effective. Case management that gives access to financial assistance, treatment, and other resources to people is a good option. Drop-in centers, employment and housing programs, and counseling services are also available. The key is to make the patient confident and make him or her remember skills needed to live a productive and independent life in the community.