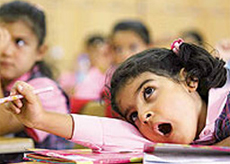 Children who have ADHD can strain marriages

Parents of children with attention-deficit hyperactivity disorder are almost twice as likely as other parents to divorce by the time their child is 8 years old, a new study suggests.

USA TODAY - A child's disruptive behavior doesn't in itself cause marriages to flame out, but it probably pours fuel on other stresses that spark marital conflict, say psychologists William Pelham Jr. and Brian Wymbs of the State University of New York-Buffalo.

In their study, 23% of parents had divorced by their child's eighth birthday if he had been diagnosed with ADHD, compared with 13% of similar parents in such factors as age, education and income whose child didn't have the disorder.

The study tracked divorces among 282 families with children who had attended a summer treatment program for ADHD symptoms. The children ranged from 11 to 28 years old at the time of the follow-up.

Pelham and Wymbs then examined how their parents' marriages had fared compared with parents' divorce rates for a similar group of adolescents and young adults. The study is published in the October Journal of Consulting and Clinical Psychology.

"ADHD creates the greatest difficulty for parents in early childhood. If your marriage survives that, the rate of divorce doesn't continue to be higher after they're 8," Pelham says.

In Wymbs' lab studies, young actors imitate the behavior of children with ADHD and at other times act like ordinary kids as they do activities with married couples. The couples argue more and feel their partner is less supportive when they're with the child who acts as if he has ADHD.

Because ADHD can be inherited, parents often have it too, and that may hinder marriage, says Andrea Chronis-Tuscano, a psychologist at the University of Maryland. If children have ADHD, their mothers are 24 times more likely than other mothers to have it, and fathers are five times more likely, her studies find. Adults with ADHD may be impulsive and find it hard to concentrate or solve problems.

"That can lead to conflict in marriage," she says, "and a child with ADHD only adds to the stress."

In other studies, parents of children with ADHD have said they're less satisfied with marriage. But not all researchers agree that they divorce more. A large Canadian report last year found no higher divorce rate for parents of children with ADHD. Pelham's group may have particularly bad symptoms because their parents sought treatment, says Lisa Strohschein, a sociologist at University of Alberta who did the Canadian study.

Nonetheless, Pelham says doctors who diagnose children with ADHD should advise parents who need it to get couples counseling.