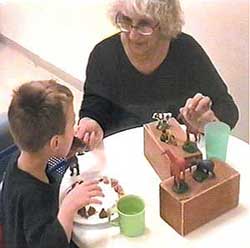 As autism cases grow in Ore., new laws may arise

State Rep. Chris Edwards, D-Eugene, and his wife knew something was wrong when their son, Simon, hit 18 months without speaking his first word.

PORTLAND, Ore. (AP) — State Rep. Chris Edwards, D-Eugene, and his wife knew something was wrong when their son, Simon, hit 18 months without speaking his first word.

By that age, most children are stringing together simple, two-word sentences: "Shoe Off!", perhaps, or the ever-popular "Want more!"

But for Simon, it would take almost two more years before the experts finally had an answer for his parents. The verdict was autism, the brain disability that affects more than 7,000 schoolchildren in Oregon, a percentage that's been growing by double digits in recent years.

Despite the delay in diagnosis, Simon Edwards was lucky. His family lives in Eugene, where there are plenty of resources available for autistic children and adults alike, and their families.

But many families across the state aren't so fortunate. Though Oregon has one of the country's highest per-capita autism rates, the state has never had a comprehensive, all-encompassing policy on the disorder, despite persistent efforts to shape one in the past.

That could be about to change. A group of autism advocates and lawmakers, including Edwards, has been working on a package of proposals to present when the Legislature convenes in January 2009. And the issue may have finally reached critical mass, with the autism population boom in the state's elementary and middle schools.

At the crux of the matter, Edwards says, is the long-running debate on whether autism is primarily a health-care issue or an education issue, and how that affects funding for the disorder. Part of the Oregon Autism Project's goal, he said, is to make sure that health and education efforts to address autism are working in tandem.

Now, work group members are taking their preliminary package on the road, holding a series of well-attended town hall meetings around the state. Meetings have already occurred in Portland, Bend and Eugene; in the week ahead, workgroup members will be in Beaverton, Coos Bay and Medford.

Some of their proposed ideas include:

• A mandated screening for autism spectrum disorder for all Oregon children at 18 months, plus immediate referral if a more thorough diagnostic evaluation is warranted.

Dr. Sarojini Budden, president of the Oregon Pediatric Society, said members of her group would back such a mandate, but stressed that early surveillance efforts and training are already under way across the state.

• Increased funding for autism services, expanding the number of caseworkers trained to work with toddlers, children and young adults who have the disorder.

• An oversight commission, with members appointed by the governor.

Despite its high autism rates, Oregon is behind the curve nationally when it comes to autism-related legislation. Twenty-five states already require comprehensive insurance coverage for autism; California has a statewide commission on autism that coordinates policy, while Ohio runs an autism scholarship program, which lets parents of autistic children pay for private tutors.

Still, this year's proposals are no slam-dunk. Money is going to be tight, particularly after the state's most recent revenue forecast projected that the state would remain in a shallow recession until mid-2009, slicing about $240 million from the amount legislators thought they'd have to spend in the next two-year budget.

The cause could find a powerful advocate in Gov. Ted Kulongoski, who said through spokesman Rem Nivens that while he has yet to hear official details from Autism Project members, "There is room to improve the services the state provides children with autism and their families."

The health insurance mandate could face some industry opposition.

Angela Hult, a spokeswoman for Regents BlueCross BlueShield, said it was too early to comment on the Oregon Autism Project's proposal.

"But mandates do have the potential to increase the cost of health insurance premiums to unaffordable levels, which can lead to discontinuation of coverage by smaller employees, individuals and increase number of Americans who don't have health insurance."

In 2007, lawmakers did approve House Bill 2819, which requires that health benefits plan must cover all medical services, including rehabilitation for developmentally disabled children, which would include autism. But advocates say some kids are still falling through the cracks.

Kathryn Weit, whose son is autistic and who sits on the Oregon Council on Developmental Disabilities, said there is grassroots support for a broader mandate, but that workgroup members want to be careful about choosing their final priorities.

In recent years, both Democratic and Republican-controlled legislatures have approved expanded coverage mandates, including for birth control and for mental health care coverage.

When legislators reconvene in 2009, though, they are likely to have a broader insurance-related priority: to cover the thousands of Oregon children who lack health care coverage completely.

Still, both Edwards and Weit point out that the nonprofit, Washington, D.C.-based National Research Council says that young children with autism need about 20-25 hours a week of individual instruction; the average in Oregon is about 12 hours a week.

Edwards said the early, intensive help that his son eventually got was immensely helpful as he transitioned into kindergarten and then first grade, where he is now doing the same work as the other kids in his class.

Weit, a veteran of autism reform efforts, said she hopes this time, the ideas that are percolating will truly take hold.

"We are wanting to make sure that things don't simply stop with a report that will sit on someone's shelf," she said.