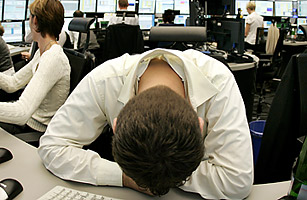 A Psychologist Looks at the Bankers' Dilemma

Dr. Peter Jenkin Morgan was watching with a knowing eye on Sept. 15, when some 4,000 Lehman Brothers employees in London's Canary Wharf lost their jobs in a flash — and cut loose with abandon in the business district's pubs.

Dr. Peter Jenkin Morgan was watching with a knowing eye on Sept. 15, when some 4,000 Lehman Brothers employees in London's Canary Wharf lost their jobs in a flash — and cut loose with abandon in the business district's pubs. Champagne corks popped, and conversations seemed to be on steroids as everyone wanted to talk. Surrounded by cardboard boxes holding their desk contents, the newly unemployed bankers drank for hours. For a night, at least, Canary Wharf looked like a carnival.

Morgan, a psychologist whose practice centers on senior-level banking executives, recognized that burst of animal spirit as the "euphoria" phase; he knew it signaled darker emotional repercussions to come as the Masters of the Universe undergo the psychological fallout from the global economic downturn. As jarring as the market drops have been, he says, "the psychological shock has been every bit as great" for bankers who have lost their jobs at Lehman and other institutions.

Morgan says many of his clients are now out of work, and thanks to research done in the past few decades, he knows more or less what they're in for. Suspicions that a layoff may be in the offing normally generate negative feelings such as disappointment, anger and shock; then comes a period of planning for the transition, when the person takes stock of financial and other aspects of his or her life. When the actual joblessness arrives, there's a period of euphoria — especially for people with compensation packages. "It's in that euphoric time that [people] ought to be doing the most work to get a job, [though] some just enjoy the euphoria," says Morgan. Finally, there's a second wave of depression that is deeper than the first: the financial reality and the challenge of finding new employment set in. "Some people just never break out" of this final phase, Morgan says. But for many, the depression reaches a plateau in a matter of months and they are able to rebound.

Bank employees have some unique problems that could intensify the dips in that model. For starters, the world is hardly well-disposed to them right now: people are angry and looking for someone to blame, and the banks and their employees are natural targets. For some employees, an entire sense of self is at-risk. "Not only is society saying, 'We don't want you to exercise [your profession] anymore,' it's saying, 'We actually don't value [your profession] anymore,'" Morgan says. The result can be a reduced sense of self-worth. Former bank employees may be timid about telling people what they do — or did. "Overnight, [people who worked in banks] have been placed in that second-hand car salesman category," says Morgan. To cope with these feelings, many out-of-work bankers and traders are heading to their health clubs to fill their time, work out their aggression and get their endorphins to kick in.

For traders, the economic downturn may come as a particularly deep shock; because most of them are young, they have never faced unemployment or recession. For their entire professional lives, their abilities have been so in demand that many have been repeatedly headhunted, giving them a sense of invulnerability. Now, Morgan says, "They're living in a world that they didn't think existed." On top of that, traders tend to be single-skilled with limited academic backgrounds, Morgan says, meaning they will need further training in order to find other jobs.

Senior-level bankers, on the other hand, have qualities that may work in their favor, aside from a cushion of accumulated wealth. They are older and have already been through market upheaval during the Black Monday crash of 1987. Morgan says they tend to be adaptable risk-takers who are good at networking and at articulating their worth. "It's the entrepreneurs who are going to succeed," he says. "It's not going to be the people who are waiting around for the next opportunity."

So will all these layoffs in the financial sector engender a wave of clinical depression? Morgan says it's too soon to tell: it depends on how long people remain unemployed. A full-blown recession lasting three or four years or longer would be cause for concern. Morgan cites increased rates of depression and suicide in British cities that relied on steel and coal manufacturing in the mid-1980s, when factories started shutting down permanently. And the suddenness of the current crash doesn't make things easier. Former Lehman Brothers employees, he says, "have some emotional catching up to do," because they hardly saw what was coming and went right into the euphoria phase. "The instant high becomes a very severe low. I think there are people who are going to be psychologically impaired," Morgan says. One thing's for sure: It won't be a carnival.