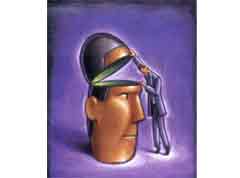 Social psychology can be used to understand nuclear restraint

Social psychology is the study of how people and groups interact.

Tampa, FL – Social psychology is the study of how people and groups interact. A new study in the journal International Studies Review shows how social psychology can help us better understand the puzzle of nuclear restraint and uses the case of Japan to illustrate social psychology on nuclear decision-making.

Maria Rost Rublee of the University of Tampa shows how social psychology's framework for how attitudes and behaviors change can be applied to the Nuclear Nonproliferation Treaty (NPT), which was signed in 1968 to limit the spread of nuclear weapons.

Japan 's forbearance can be seen as a result of identification. The Japanese have defined themselves in relationship to the United States , not just in defense matters, but politically, economically, and even socially. However, the most compelling reason for Japan 's choices to forgo nuclear weapons is persuasion, based on the larger issue of what it means to be a successful state.

Japan 's faith in the NPT is not because policymakers believe that it will definitely keep other states from pursuing nuclear option, but rather because it furthers the norm they believe in.

Social psychology has also found that the need to both appear and be consistent is a powerful motivator. Once Japan signed the NPT, the nuclear option was largely closed.

"To the extent that we can better understand the mechanisms that produce compliance across regime type and across issue area, the better able we will be to offer useful policy prescriptions to policymakers," Rublee notes.