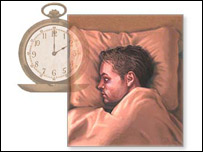 Sleep position may cause apnea in stroke patients

Stroke patients spend most of their time asleep on their backs, which may contribute to a breathing problem called sleep apnea, according to findings reported in the journal Stroke.

NEW YORK (Reuters Health) - Stroke patients spend most of their time asleep on their backs, which may contribute to a breathing problem called sleep apnea, according to findings reported in the journal Stroke.

Obstructive sleep apnea is a common problem in which soft tissues in the back of throat repeatedly collapse during sleep causing breathing to stop for brief moments. Snoring as well as excessive daytime sleepiness are common symptoms. The condition can be effectively treated with a small machine that blows air into the throat, preventing the tissues from collapsing.

"Sleep apnea is very common after stroke and is associated with poor outcome," Dr. Devin L. Brown and colleagues from the University of Michigan, Ann Arbor, write. Sleeping on the back, also known as "supine sleep," is known to make the problem worse in the general population.

For their study, the researchers performed full sleep testing that included monitoring the sleep positions of 30 patients hospitalized with a stroke. The average patient age was 67 years.

The patients spent the "vast majority" of their sleep time in the supine position, the investigators found. In fact, 63 percent of patients spent no time asleep in any other position.

The results also showed that the time spent sleeping supine increased as the severity of the stroke worsened.