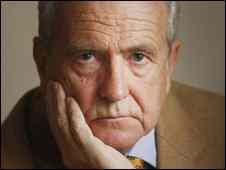 The former chairman of the Royal Bank of Scotland has warned there is a "serious risk" of an economic depression in the UK.

And he also backed printing money and cancelling VAT in areas such as house extensions and insulation.

And he said the UK Government's plan to guarantee up to £20bn of loans to small and medium-sized firms would become a bureaucratic nightmare - claims which were dismissed by the chair of the Commons Treasury select committee, John McFall.

Sir George told BBC Scotland's Politics Show there was now a serious risk of a depression, generally defined as a recession lasting for several years.

"Right now, I think it's depression that we've to be really worried about," he said, adding: "That causes real personal suffering for a lot of people."

It has emerged that the UK Government could be set to take even larger stakes in some of Britain's biggest banks, but Sir George went on to say that putting more capital into them was "fundamentally not the answer", and supported depositer guarantees as an alternative.

And he said there were a lot of question marks on underwriting bank loans to businesses, telling the programme: "I've never seen that sort of thing work.

"I've been involved in both public and private investing in small businesses for most of my financial life and it's a very difficult business."

Mr McFall dismissed Sir George's comments, saying: "The most serious question addressing the economy at the moment is - get lending to small businesses.

"I was talking to businesses in Scotland, particularly businesses in the motor industry and they were making the point that will be helpful."

The Labour MP went on: "The question is - is there enough money there at the moment?

"I don't think there is and I think what you'll find, when announcements are made by the government, is there will be more money in that particular area - but guaranteeing that to businesses is extremely important."