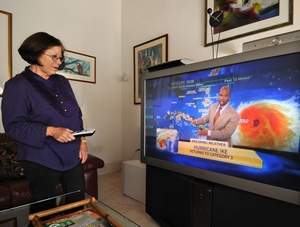 Psychology of hurricanes: Storms trigger fear in past victims

For those who live in its path, hurricane season stirs up anxiety even before devastating winds and rains hit land.

ASSOCIATED PRESS - And for Suzanne Bonner, that means the days of blissfully lying in bed and listening to the rain no longer exist. Instead, alarms sound at 5 a.m. so she can check the latest forecast. She turns to the Weather Channel instead of watching a tennis match. And the first spot on her speed dial is reserved for a contractor, not her husband.

While there's always a certain nonchalance among those who call islands and coastal lands their home, it is different for those who have lived through devastation -- and fear that tragedy is again on its way.

"I, like everybody else, would get excited about it and visualize strapping myself to a tree in the winds," 62-year-old Bonner said. "It's not until you go through a major hurricane like Andrew, and you realize the severity of it and that it's not a joke. You're never the same after that. You never look at rain the same."

It was 1992's Hurricane Andrew that destroyed her dream home and changed her life. Then, 13 years later, Hurricane Wilma damaged it all over again. In between and since, there have been countless storm warnings that kick up her anxiety.


It's a story heard all along the Gulf Coast and in the Caribbean, the prime targets for hurricanes.

In Fort Lauderdale, at the Anxiety Treatment Center at Nova Southeastern University, patients have been mentioning fears about Hurricane Ike more than in storms of years past.

"People are very anxious and this uncertainty of what's going to happen actually causes them to feel worse," said Craig Marker, a psychologist there. "With all the false alarms, I would expect that people would think of this as another false alarm. But it's almost like they feel an expectation it's about to come again."

It's toughest on those who've been through disaster before.

Lauren Bronleewe grew up in Tampa and always thought of hurricanes as holidays. Some of the best parties she attended in high school were when a storm was looming.

But when Hurricane Katrina struck three years ago, Bronleewe was living in New Orleans, a student at Tulane University. It changed her viewpoint forever.

"I can guarantee that I'll never attend another hurricane party for the rest of my life," she said.

In the Dominican Republic, 67-year-old Santo Domingo resident Juan Cepeda said he began respecting the strength of storms after he was first affected by one about 20 years ago.

"My house was flooded, all my clothes were wet, the TV was ruined, it was a disaster," he said. "It's traumatic to live with that smell of mud for two months."

In the Bahamas, Randy Forbes, a 33-year-old chauffeur, said he remembers seeing buildings without roofs and widespread flooding after Hurricane Floyd passed near Nassau in 1999.

"The destruction makes me not want to be here," he said.

But others have become so accustomed to storms, the fear has dulled.

In August, Hurricane Gustav triggered a landslide that nearly crushed the home of 58-year-old Easton Ellis in Jack's Hill, Jamaica. But he stayed calm, having fortified the house and stocked up on food and water. "I'm not really scared," he said, "because I have seen so much of them."

Douglas Jones, a 30-year-old insurance broker from Paget, Bermuda, said there's a lot of complacence as storms approach. "Once we have battened down, we tend to sit back, relax and get drunk," he said.

"It's kind of the flip side of the reason people continue to play a given slot machine -- it has to pay off after so many pulls," she said. "We are not often the most rational when it comes to assessing risk."

As for Bonner, you can count on her continuing to rise early to get the latest storm news. She can't help feeling stressed. And even if the forecast shows the storm veering further south, she can't forget what she's been through before.

"It changes your life," she said. "It changes the way you do things."