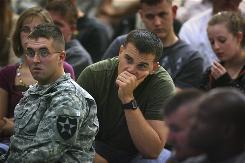 Post-traumatic stress is a war within for military and civilians

Post-traumatic stress disorder, once a poorly understood and little-known mental health problem, is turning up on the public's radar a lot more as growing numbers of Iraq and Afghanistan war veterans seek treatment for the illness.

By Marilyn Elias, USA TODAY
Post-traumatic stress disorder, once a poorly understood and little-known mental health problem, is turning up on the public's radar a lot more as growing numbers of Iraq and Afghanistan war veterans seek treatment for the illness.

About one out of seven service members have returned from deployments with symptoms of the disorder, according to a Rand Corp. study out in April. The Department of Veterans Affairs reported about a 70% jump in veterans seeking treatment for PTSD in the 12 months before June 2007 and an additional 50% rise in the next nine months.

Despite all the public attention, myths about PTSD abound, says Farris Tuma, chief of the traumatic stress program at the National Institute of Mental Health.

One myth is that the disorder is only psychological. But it's a biologically based condition, says Tuma, with the body's stress-response system in overdrive.

Possibly the most widespread myth is that the top cause of PTSD is military combat. Research says it's auto accidents.

Treatment gives most people relief from symptoms, Tuma says. Specialized therapies and/or medication, usually SSRI antidepressants such as Zoloft, work best, he adds. But Americans with PTSD wait an average of 12 years before getting treated.

Although many shrug off symptoms on their own or with the help of friends, the disorder can linger for others. About 20% of those in car accidents that caused injuries have PTSD a year after the accident, suggests a long-term study in Albany, N.Y. There were 2.5 million people injured in car crashes last year, according to the National Highway Traffic Safety Administration, so many are at risk.

Lisa Hardimon, 43, feels she was headed toward chronic PTSD after a crash at an intersection rolled her car three times into oncoming traffic, leaving her trapped upside-down under the collapsed roof. A Redondo Beach, Calif., physical therapist and graduate student, she had medical care after the accident, which was seven years ago.

Hardimon's voice breaks and she cries as she describes the worst after-effects: "Getting back in a car was just awful — my heart raced at intersections. I would see like a video of the scene all the time. I couldn't concentrate and had trouble sleeping." A psychologist told her she had PTSD.

The symptoms eased. "It took about a year, though, and it was a conscious decision that I couldn't live this way. I was married and wanted to have kids. … I began to block it out, not let myself think about it."

As a physical therapist, Hardimon had seen how patients' fears can limit their lives. "I knew that I would be too afraid to leave home if I let myself keep going in this direction."

Because PTSD can impair so much of a person's life, mental health experts are concerned about the fallout for young soldiers.

Vietnam veterans with PTSD but no heart disease in their mid-30s were twice as likely as veterans without PTSD to die of heart disease by their 50s, shows a new study by psychologist Joseph Boscarino of the Geisinger Health System in Danville, Pa. That's equal to the greater heart attack risk from smoking two to three packs of cigarettes a day for more than 20 years, Boscarino says.

Although the military screens today's troops for PTSD, which wasn't done during Vietnam, about half of recent veterans with PTSD symptoms haven't sought treatment, according to the Rand study this year.

The longer someone has PTSD, the more likely he'll develop drug or alcohol abuse, Tuma says. And sexual problems in veterans with traumatic stress are another concern, says Suzie Chen, who counsels veterans at the VA Hospital in Long Beach, Calif.

Between 63% and 80% of combat veterans with PTSD have sexual problems, according to studies from the Vietnam era through the Iraq war. Combat troops with PTSD are far more likely than other men to have erection difficulties, suggest studies in a research review by Chen. The causes may be biological or emotional. Some don't even sleep in the same rooms as their spouses because of nightmares, she says.

The Pentagon funneled an unprecedented $300 million this year into new research on PTSD and brain injury, an investment expected to benefit civilians as well as troops.

"We need to learn a lot more about treatment of PTSD," says Tuma, "but more people have to be willing to go for help to get the payoffs."