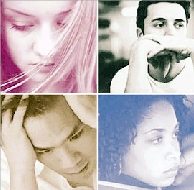 About one-third of students at a Turkish university suffer from depression, half from anxiety and one-third from stress, a study conducted by university professors found.

TODAYSZAMAN - Professor Nazan Bilgel, the head of the family medicine department at the faculty of medicine of Uludağ University, and Associate Professor Nuran Bayram, a lecturer at the econometrics department of the economics and social sciences faculty at the same university, surveyed 1,617 students attending Uludağ University to gauge the frequency of depression, anxiety and stress as well as the socio-demographical factors correlated to these disorders.

The students were asked to answer 42 questions from the Depression Anxiety Stress Scales (DASS), which is known to have high validity and reliability.

Bilgel indicated that university students’ mental health is a growing concerning for many countries and that they conducted the study to identify the depression, anxiety and stress levels of university students who attend Uludağ University.

She explained that anxiety and stress values were higher for female students than male students.

“We found out that the students who said they were happy with their education had lower depression, anxiety and stress levels than those who reported that they were unhappy with their education. We found no correlation between depression and anxiety values and age. However, we observed that the students from the age group 17-19 have higher stress values than those from the age group 20-26. Girls have higher stress and anxiety values than boys. No such connection can be established between depression and gender. Depression and anxiety values were found to be higher for students who attend social and political sciences than those attending science, engineering and medicine faculties,” she said.