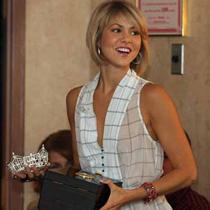 The 19-year-old Miss America 2008, who hails from Michigan, admits it sounds "very, very oxymoronic," but it's true.

When she ran for Miss Oakland County and Miss Michigan, Haglund felt "a very positive pressure" to look healthy.

When it came to the swimsuit portion of the pageant, the tall blond said she didn't want to "go out there and look like a walking eating disorder."

She won both contests.

"They want a role model and a leader who is fit, who is healthy first," Haglund said.

Her talk was part of The Global Dinner Table, a three-day health and wellness conference hosted at the Windsor Hilton by the Bulimia Anorexia Nervosa Association.

As a child, Haglund said she spent as many as six days a week pursuing her dream of becoming a professional ballerina. When, as a tween, she went away to ballet camp in another state, the competition made her hypersensitive about her weight and eating habits.

She wanted to emulate the successful, albeit emaciated, dancers with whom she trained.

"And then I saw what they were eating, and it wasn't very much," Haglund said.

She equated their talent with their light weight. It didn't help matters when a teacher pointed out her slight bulge over her skirt.

She began to believe losing weight could "make me better" as a ballerina. At first, she wanted to lose just five pounds. But, before long, the young girl couldn't look in the mirror without obsessing about extra flesh.

Soon her diet consisted of caesar salads and lemon juice. Still, no matter what drastic measures she took, Haglund could never achieve that elusive perfect weight.

"I would just sob because I was too fat," she said. "I was so unhappy."

Even ballet classes, once the source of joy, became miserable affairs, with wall-to-wall mirrors reflecting what she saw as her imperfections.

Poorly nourished, she was often weak and tired. Her stomach hurt. She couldn't sleep. Her hands were always cold and her heart rate was low.

After returning from yet another ballet camp, this time as a teenager, looking "a lot" thinner than when she left, her parents decided to take action. Her mom staged an intervention and took her daughter to a Michigan hospital. At first, Haglund said, she felt betrayed by her parents, who are both nurses. But once doctors spoke to her about the poor state of her health, Haglund agreed to take steps toward recovery.

"I realized, 'oh my gosh, I could die,'" she said. "There were serious physical consequences of my actions."

Haglund credits her parents' support and the hospital's treatment program for helping her get healthy again.

But, she also gives credit to that first pageant she won -- Miss Oakland County -- and every one that followed for forcing her to turn her health struggles into a campaign, to inspire others to beat their eating disorders.